This application sought to extend the current authority required listing for docetaxel on the Pharmaceutical Benefits Scheme (PBS) to include the treatment of Androgen Independent (Hormone Refractory) prostate cancer.

Docetaxel currently has authority required listings on the PBS for:

Docetaxel is registered by the Therapeutic Goods Administration (TGA) for the following indications:

: Treatment of patients with locally advanced or metastatic non-small cell lung cancer, including those who have failed platinum based chemotherapy.

: Treatment of metastatic carcinoma of the ovary after failure of first line or subsequent chemotherapy.

The evaluation noted that the key clinical trial (TAX327) was conducted in patients with metastatic hormone-refractory prostate cancer. However, the PBAC accepted that patients with androgen-independent (hormone-refractory) prostate cancer would most usually be suffering from metastatic cancer and therefore agreed that inclusion of the word ‘metastatic’ in the restriction would be redundant.

5. Clinical Place for the Proposed Therapy

Prostate cancer is the most common cancer in Australian men and the second leading cause of male cancer deaths. Long-term disease-free intervals are commonly associated with surgical or radiotherapeutic treatment in more than 60% of subjects with localised cancer. Such outcomes are not common for subjects with locally spreading or distant metastatic prostate cancer. Although hormonal manipulations, such as luteinising hormone-releasing hormone (LHRH) agonists/antagonists or castration, are initially effective for 90% of prostate cancer patients, all of them eventually progress after a median of 18 to 24 months of treatment to become “androgen independent”(hormone refractory). Upon progression, secondary hormonal manipulations are often employed. However, these treatments are generally less effective, and any activity against the cancer is usually short-lived. Docetaxel can be used in the treatment of patients with androgen independent (hormone refractory) prostate cancer.

The submission nominated mitozantrone as the comparator. This was accepted as appropriate by PBAC.

The submission presented evidence from one key randomised controlled clinical trial (TAX327) and one supportive study (SWOG9916). Both studies had been published at the time of submission, as follows:

In the key trial TAX 327, docetaxel/prednisone treatment given three weekly resulted in a 24% reduction in the risk of mortality (hazard ratio = 0.76; 95% CI: 0.62, 0.94) compared with mitozantrone/prednisone, with a difference in median survival of 2.4 months. Similar results were found in the supportive trial.

The Kaplan-Meier curve for overall survival in TAX 327 is shown in the figure below: 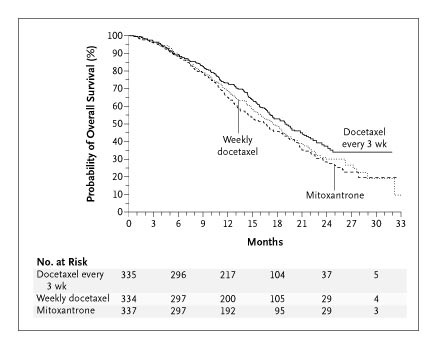 The PBAC noted that there was no statistically significant difference in overall survival when docetaxel is administered weekly. However, only the 3 weekly drug regimen is recommended in the TGA-approved Product Information.

Quality of life was evaluated in 815 patients of the total ITT population of 925 in the TAX 327 trial, for whom a local translation of quality of life questionnaire was available. A statistically significantly higher percentage of patients had an improvement in quality of life in the docetaxel three weekly group (22%) compared with the mitozantrone group (13%).

Adverse events of any grade, or of Grade 3 or 4, that occurred or worsened during treatment, are summarised in the following table.

(Note: the patient numbers in this Public Summary Document are taken from the cited publications. They may vary slightly from the numbers considered by PBAC which were taken from the sponsor’s internal reports. These differences do not affect the overall conclusions.)

Adverse Events of any grade, or of Grade 3 or 4, that occurred or worsened during treatment in TAX 327 (key trial; Tannock et al 2004) (Table is cited from the Study Publication.)

The numbers of subjects with Grade 4 or life threatening adverse events possibly or probably related to treatment were similar between the two groups. Overall the numbers of complications related to therapy were higher in the docetaxel versus the mitozantrone arms. A similar percentage of patients in each treatment arm stopped treatment due to adverse events (11% vs 10%; docetaxel 3 weekly vs mitozantrone, respectively).

The PBAC had a number of concerns with these results.

The submission claimed that docetaxel was significantly more effective and had similar or less toxicity than mitozantrone in the treatment of androgen independent prostate cancer.

The PBAC considered that compared with mitozantrone/prednisone, docetaxel/prednisone significantly extends overall survival, but is associated with a higher rate of adverse events. (see also Recommendations and Reasons).

A preliminary (trial-based) economic evaluation was presented. The resources included were medication costs, chemotherapy administration and hospitalisation for adverse events.

A modelled economic evaluation was also presented. The PBAC agreed that the choice of the cost-effectiveness approach was valid, but a cost-utility analysis would also have been informative because quality of life is an important issue for patients with metastatic prostate cancer. The resources included were drug costs, drug administration and hospitalisation.

The base case modelled incremental undiscounted cost per extra undiscounted life-year gained (LYG)fell in the range $45,000 - $75,000.

The PBAC considered this to be high and could increase if the trial maximum of 10 cycles of docetaxel is administered, as in the key trial. Furthermore, if the life-years gained in these ratios were quality adjusted, the results of the ratios would be even higher.

The submission requested that the “rule of rescue” apply to the reimbursement of docetaxel in this indication, on the grounds that there is no alternative therapy available in Australia that prolongs the overall survival of androgen independent prostate cancer patients; that patients have a very limited life expectance and that patient numbers are small. The PBAC did not accept that docetaxel in the treatment of prostate cancer met the PBAC’s definition of “rule of rescue” because there are other therapies available to treat the condition.

The annual incremental cost to the PBS was estimated in submission to fall in the range of $10 - $30 million in Year 4 of listing.

The submission proposed a risk sharing arrangement, for this indication only.

In the key trial TAX 327, docetaxel/prednisone treatment given every three weeks as recommended results in a statistically significant 24% reduction in the risk of mortality

(HR= 0.76; 95% CI: 0.62, 0.94) compared with mitozantrone/prednisone, with a difference in median overall survival of 2.4 months. However, the PBAC noted that there was no difference in overall survival when the drug is administered weekly, a drug regimen which, although not recommended in the TGA-approved Product Information, is often used in practice because it is less toxic.

The PBAC noted that the numbers of treatment cycles with Grade 4 or life threatening adverse events possibly or probably related to treatment are similar between the mitozantrone and docetaxel every three weeks, although there is a greater incidence/subject in this docetaxel arm because of longer exposure to the study drugs. Overall, the numbers of complications related to therapy were higher in the docetaxel every three weeks arm versus the mitozantrone arm.

The PBAC questioned the biological plausibility for the submission’s argument that docetaxel has advantages in terms of quality of life despite some support being provided by certain elements of secondary outcomes (such as pain response) measured in the key trial. The PBAC considered that assessments were performed at a time that may favour docetaxel.

The PBAC considered that the base-case incremental cost per extra life year was high and increases if the trial maximum of 10 cycles of docetaxel is administered, as in the key trial. Furthermore, if the life-years gained in these ratios were quality adjusted, the results of the ratios would be even higher. An exploratory Q-TWIST analysis was performed by the PBAC. The impact of this quality adjustment on the extra life-years gained is that an incremental cost per extra quality adjusted life year (QALY) gained would be substantially >$100,000.

Although not reasons for rejection, the PBAC noted the uncertainty about the numbers of patients who would be treated if docetaxel were PBS-listed for this indication, and the resulting cost to the Government, and the difficulty of identifying accurately the number of patients on docetaxel with prostate cancer to any risk sharing agreement.

The PBAC rejected the submission because of uncertain and unacceptable cost-effectiveness.

Sanofi-aventis acknowledges the PBAC’s acceptance of the additional median survival benefit of 2.4 months for docetaxel 3 weekly over mitozantrone. This is the first time a survival benefit has been demonstrated in androgen independent prostate cancer.

However, the sponsor has the following comments:

1. The PBAC has not provided sanofi-aventis with any evidence to support its claim that docetaxel would often be used outside of the approved dosage schedule of three weekly administration and instead used weekly to minimise adverse events. Given the significant survival benefit seen in the docetaxel three weekly arm of TAX 327 plus the fact that the investigators, “found no evidence of a lower rate of adverse events or improved outcomes with the weekly schedule” (Tannock et al. 2004), there is greater incentive to prescribe docetaxel three weekly.

2. Sanofi aventis would like to continue the discussions on the relevance of cost/QALY, cost/LYG and Q-TWIST analyses in the evaluation of the benefit of an effective treatment for androgen independent prostate cancer.

Because of concerns of fundamental issues raised by the PBAC, the sponsor cannot address the issues in a resubmission without a full discussion with interested parties to ascertain how best to evaluate medicines that improve overall survival in end stage cancer.