The submission requested Section 100 Efficient Funding of Chemotherapy Program Private Hospital / Private Clinic Authority required and Public Hospital Authority required (STREAMLINED) listings for the treatment of a patient with locally advanced or metastatic breast cancer who has progressed after at least two chemotherapeutic regimens for advanced disease. Prior therapy should include an anthracycline and a taxane unless these treatments were unsuitable for the patient.

This product had not been considered by the PBAC previously.

Eribulin was registered by the TGA on 4 September 2012 as follows:

5.   Clinical Place for the Proposed Therapy

The submission’s proposed clinical management algorithm for the intended use of eribulin is presented below. 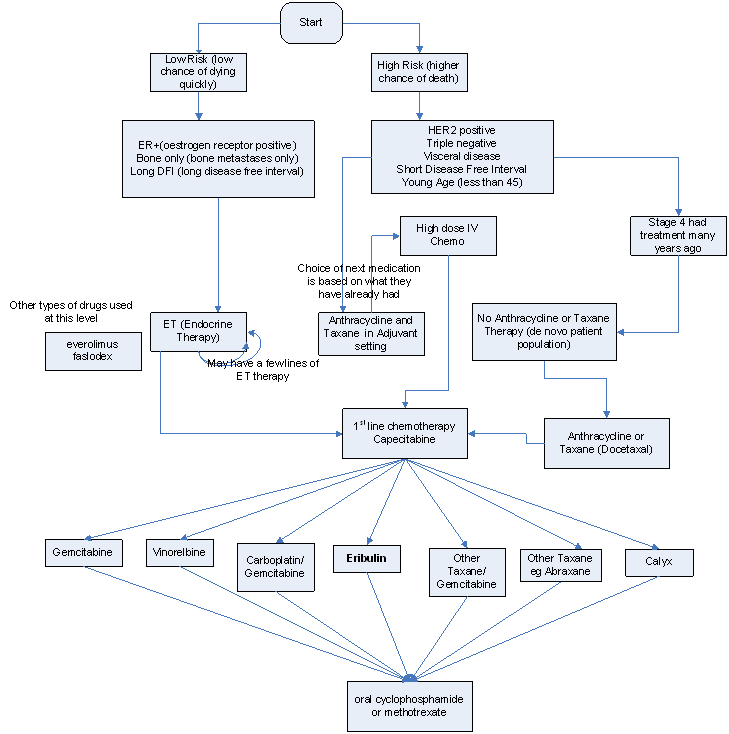 The PBAC considered that the proposed place of therapy after the use of capecitabine, was clinically inappropriate.  The PBAC considered that the appropriate place of therapy was likely to be after anthracyclines and taxines but that eribulin may be used before or after capecitabine.  The PBAC also noted that in HER2 positive breast cancer, clinicians may want to use eribulin in combination with trastuzumab.

The submission nominated treatment of Physician’s Choice (TPC), the alternative treatment the investigator elects as appropriate; defined as any single agent chemotherapy, hormonal therapy or targeted therapy approved for the treatment of cancer (for any tumor type – not just breast cancer), or best supportive care or radiotherapy, administered according to local practice, if applicable.

The table below details the published trials presented in the submission.

The primary efficacy endpoint in the EMBRACE trial was overall survival (OS).  Results are presented in the table below.

The submission presented the overall survival (OS) as the primary endpoint for the EMBRACE trial.

Note: a Hazard ratio based on a Cox model including HER2/neu status, prior capecitabine treatment, and geographical region as strata.

b Hazard ratio based on a Cox model including HER2/neu status, prior capecitabine treatment, geographical region as strata, and number of prior chemotherapy regimens, and estrogen receptor status as covariates.

The submission stated that eribulin has a manageable non-inferior safety profile, given the percentages of patients who experienced death or treatment related SARs were similar between eribulin and TPC patients, 25% vs. 25.9%, respectively.

The PBAC noted that the incidences of neutropenia, leukopenia and peripheral neuropathy were higher in the eribulin group (51.7%, 23.1% and 34.6% respectively) than in the TPC group (29.6%, 11.3%, and 16.2%). The PBAC also noted that the use of granulocyte stimulating factors to reduce the risk of febrile neutropenia was much higher in eribulin arm (17.7%) than TPC arm (7.7%).

The PBAC further noted the presentation of the differential adverse events given in the Sponsor’s hearing which compared adverse events with eribulin to other chemotherapy products.

The submission presents a trial-based economic evaluation, based on the key direct randomised trial (EMBRACE) and implementing a modelled evaluation based on extrapolated survival curves. The PBAC considered that, the availability of updated OS data in the PSCR rendered the extrapolation of the survival curves unnecessary. The types of economic evaluation presented were a cost-utility analysis and a cost-effectiveness analysis (with Life Years as the outcome). The cost-utility analysis is presented in the form of a Cost-Quality Adjusted Time Without Symptoms or Toxicity (QTWiST) analysis.  The PBAC considered that this approach was appropriate, however noted that the economic analysis did not adequately capture the disutility of treatment.

Using the updated survival data provided in the PSCR, the ICER for the intention to treat (ITT) population was between $45,000 and $75,000 per life year gained (LYG).  The ICER for the post capecitabine subgroup was lower within the same range.

The submission estimated the total net cost to the PBS to be between $10 – $30 million over the first 5 years of listing (excluding co-payments).

The PBAC considered there were a number of issues concerning the submission’s estimates of the financial implications of listing eribulin, namely:

The PBAC rejected the submission on the basis of unacceptably high and uncertain cost-effectiveness and because of a lack of clarity regarding the clinical place of the product.

With regard to the submission’s nominated comparator, the PBAC noted that the available data do not provide any clarity about the relative mix of agents used in the Australian setting and that the EMBRACE study had taken a pragmatic approach of Treatment of Physician’s Choice (TPC). This was defined as any single agent chemotherapy, hormonal therapy or targeted therapy approved for the treatment of cancer (for any tumor type – not just breast cancer), or best supportive care or radiotherapy, administered according to local practice, if applicable.

In the EMBRACE trial, TPC consisted of chemotherapy (97%) and hormonal therapy (3%). Chemotherapy included vinorelbine, gemcitabine, capecitabine, taxanes, anthracyclines, cisplatin, carboplatin, cyclophosphamide, etoposide, mitomycin, fluorouracil and methotrexate. Hormonal therapy included fulvestrant, letrozole, exemestane and tamoxifen. All drugs are PBS listed except mitomycin and fulvestrant. There are a small number of recipients of these drugs in EMBRACE (n=1 for mitomycin and n= 4 for fulvestrant).

The PBAC considered that the mix of agents used in the economic model in the pre-subcommittee response may not accurately represent Australian clinical practice.

From the data presented on overall survival, the PBAC considered that eribulin had demonstrated superior efficacy over the comparator based on the overall survival results. However, the PBAC did not consider the claim of non-inferior toxicity was supported, based on additional G-CSF requirements.

From the results of the economic analysis, the PBAC considered the ICER presented in the PSCR (verified by the Evaluators) based on the OS results observed in the updated data for the comparison versus TPC of between $45,000 and $75,000 per LYG to be unacceptably high and uncertain.  The PBAC did not consider the analysis of the post-capecitabine subgroup to be informative, given that the appropriate place of eribulin could be before or after capecitabine and that eribulin could be used in combination with trastuzumab.  The PBAC considered that the submission had not adequately addressed the comparative disutility associated with eribulin treatment.

The PBAC also considered that the submission’s estimates of usage and financial implications were uncertain.

The PBAC noted the consumer comments received in relation to the submission.

The PBAC noted that the submission is eligible for an Independent Review.

Whilst Eisai is disappointed with the decision of the PBAC Eisai is committed to working with the PBAC to address the issues and questions that have been raised, to ensure Halaven is listed on the PBS for eligible patients.