The submission requested the current Section 100 (Highly Specialised Drugs Program) Public and Private Authority Required listing for lenalidomide be amended to include initiating and continuing treatment of patients with myelodysplastic syndrome (MDS), defined as low or immediate-1 risk MDS associated with a deletion 5q cytogenetic abnormality that are transfusion-dependent.

Highly Specialised Drugs are medicines for the treatment of chronic conditions, which, because of their clinical use or other special features, are restricted to supply to public and private hospitals having access to appropriate specialist facilities.

This was the third consideration by the PBAC of a submission requesting listing of lenalidomide for treatment of MDS.  The PBAC rejected a major submission in March 2011 and a minor re-submission in July 2011 for MDS, defined as low or immediate transfusion-dependent 5q deletion cytogenic abnormality.

Public summary documents for the March 2011 and July 2011 considerations are available.

An extension to the TGA registration for lenalidomide was granted on 15 April 2010 to include the treatment of patients with transfusion-dependent anaemia due to low or imtermediate-1 risk myelodysplastic syndromes associated with a deletion 5q cytogenetic abnormality with or without additional cytogenetic abnormalities.

Lenalidomide was TGA registered on 20 December 2007 for use in combination with dexamethasone in patients with multiple myeloma whose disease has progressed after one therapy.

Initial treatment for a period of up to 16 weeks of a patient with:

MDS classified as low risk or Intermediate-1 according to the International Prognostic Scoring System (IPSS); and

Classification of a patient as low risk requires a score of 0 on the IPSS, achieved with the following combination:  <5% marrow blasts with good karyotypic status (normal, -Y alone, -5q alone, -20q alone), and 0/1 cytopenias.

Classification of a patient as Intermediate-1 requires a score of 0.5 to 1 on the IPSS, achieved with the following possible combinations:

< 5% marrow blasts with intermediate karyotypic status (other abnormalities), and 0/1 cytopenias; OR

< 5% marrow blasts with intermediate karyotypic status (other abnormalities) and 2/3 cytopenias; OR

5%-10% marrow blasts with intermediate karyotypic status (other abnormalities), and 0/1 cytopenias; OR

Classification of a patient as transfusion dependent requires that they have received at least eight units of red blood cells over the most recent six month period prior to requesting access to lenalidomide on the PBS, and would be expected to continue this requirement without lenalidomide treatment.

Continuing treatment of a patient with:

MDS classified as low risk or Intermediate-1 according to the International Prognostic Scoring System (IPSS); and

who has been previously issued with an authority prescription for lenalidomide and who has achieved a minor erythroid response (≥50% reduction in red blood cell requirements compared with the most recent six month period prior to requesting access to lenalidomide on the PBS) and remains free from disease progression.

Patients receiving lenalidomide under the PBS listing must be registered in the i-access™ risk management program.

5.  Clinical Place for the Proposed Therapy

The myelodysplastic syndromes (MDS) are a group of disorders of haematopoiesis (formation of blood cellular components), characterised by reduced numbers of different types of blood cells. Patients may have anaemia, thrombocytopenia (low platelets), neutropenia or combinations of these. Patients with a specific subtype characterised by anaemia and the presence of a deletion of the 5q chromosome  typically have a better prognosis for survival and freedom from progression to acute myeloid leukaemia (AML) than occurs in patients without a 5q deletion.

There are currently no curative options available for patients with MDS although a small percentage of younger and fitter patients may achieve long-term disease control through allogeneic transplantation. Almost all patients with MDS receive background supportive therapy consisting of red blood cell (RBC) and platelet transfusions, antibiotics, growth factor support and iron chelating therapy. The PBAC noted that iron chelation therapy is overused in treating this condition, with limited benefits in patients with short life expectancy.

Azacitidine is used in selected patients at higher risk of transforming to leukaemia.

The submission proposed lenalidomide as an alternative treatment option to best supportive care for transfusion-dependent patients with the 5q deletion subtype of MDS.

There were no new trials presented in the re-submission.

The table below details the published trials presented in the re-submission.

The results of the trials have been previously reported in the March 2011 Public Summary Document.

The re-submission presented new long-term data for time to AML and overall survival, secondary outcomes of study MDS-004, (also published in Fenaux et al, 2011) as shown in the table below.

a Compared to patients who  were never treated with lenalidomide

The results included the effect of cross-over of those patients allocated to placebo treatment, who did not achieve transfusion independence within the first 16 weeks, and according to the trial protocol were permitted to cross over to treatment with lenalidomide.

Progression to AML by Transfusion Dependency 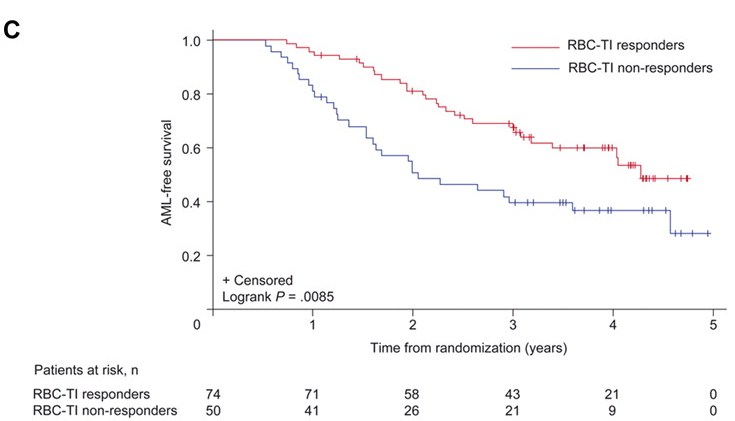 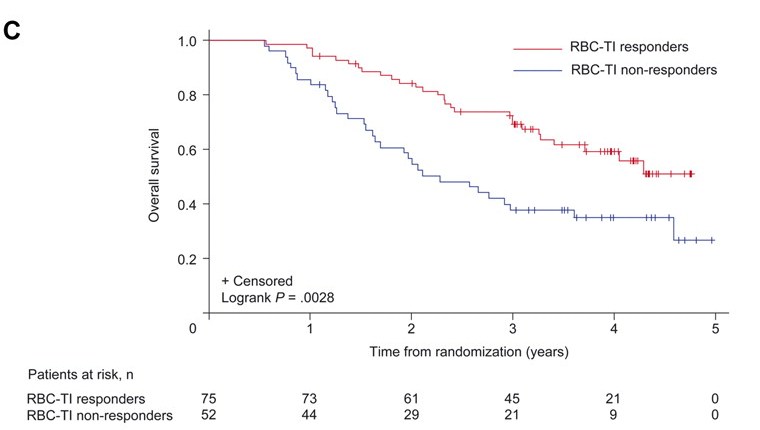 The re-submission stated that the updated long-term results from MDS-004 showed that patients who achieved transfusion independence had delayed progression to AML and longer OS compared with those who remained transfusion dependent.  However, the re-submission argued that it could not be verified if this outcome could be solely attributed to treatment with lenalidomide because of the complexity of cross-over between placebo and lenalidomide at 16 weeks.  Therefore, the resubmission could not attribute solely that lenalidomide would increase the time to AML and/or improve OS rates.

No new safety data were provided in the re-submission. Safety data had been previously reported in the March 2011 Public Summary Document.

The re-submission claimed lenalidomide to be superior in terms of comparative effectiveness and associated with more toxicity over best supported care.

The re-submission presented a stepped economic evaluation, based on the pivotal trial (MDS-004) that was similar to the previous submissions.  The model was a decision analytic model which compared the use of lenalidomide (plus BSC) with BSC alone for the treatment of patients with transfusion dependent low risk/INT-1 del(5q) MDS. The time horizon was 12 months. There were no major changes made to the overall structure of the model. The re-submission presented revised ICER of between $15,000 - $45,000 per QALY gained (compared with between $45,000 and $75,000 in the previous submission).

The likely number of patients per year was estimated in the submission to be less than 10,000 in Year 5, at an estimated net cost per year to the PBS of less than 10 million in Year 5.

The PBAC recommended the restriction be an initial written application for approval of up to 16 weeks treatment of a patient with MDS classified as low-risk or intermediate – 1 with a 5q cytogenic abnormality and who is transfusion dependent. The PBAC recommended that for the purposes of this restriction, the definition of transfusion dependence require a patient to have been transfused within the last 8 weeks and to have received at least 8 units of red cells over the most recent 6 months prior to requesting access to lenalidomide on the PBS, and would be expected to continue this requirement without lenalidomide treatment.

The PBAC also recommended that the first application for continuing supply should be a written application providing evidence of response and that information provided should include the haemoglobin level (within the last 4 weeks), the date of the last transfusion and a statement verifying that the patient is transfusion independent or has reduced transfusion requirement by 50% since commencing lenalidomide. The specialist should also confirm that the patient has not progressed to AML. Subsequent requests for continuation could be made over the telephone. The information collected for the first continuation should be provided at each application.

The PBAC agreed that the restriction was complex and may take time and consultation to finalise.

The PBAC accepted the clinical claim of superior cost effectiveness over the comparator, best supportive care, based on the clinical trial evidence presented. The presented study showed a statistically significant increase in transfusion independence in people taking lenalidomide 5mg and 10mg after 6 months. This PBAC noted that patients taking lenalidomide progressed to acute myeloid leukaemia at a slower rate. While the trial results did not show a statistically significant change in overall survival, possibly owing to the cross-over of patients after 16 weeks, the PBAC considered that there was a trend favouring lenalidomide.

PBAC considered that treatment with lenalidomide was associated with more toxicity than best supportive care and that dose reduction would be required to manage side effects in a number of patients.

The PBAC considered that overall the economic model favoured lenalidomide. The PBAC considered that the pre-PBAC response addressed the major issue around cost of treatment by including a proportion of 5mg and 10mg formulation in the model. In addition, the pre-PBAC response proposed a revised cost for lenalidomide. This resulted in an acceptable ICER of  between $15,000 and $45,000 per QALY gained.

The PBAC accepted the net cost to the Government provided in the pre-PBAC response reflected the most likely estimate of use in Australia. The patients enrolled in the clinical trial reflected the PBS-eligible population but the PBAC was concerned that there was a risk of broader use, particularly where patients did not cease therapy when non-responsive (non-response as measured in the clinical trial). The Committee noted that inclusion of non-responders and use of PBS listed medicines to manage adverse drug events in the estimates model was appropriate.

In considering the total cost, the PBAC recommended that the Commonwealth and sponsor have a risk sharing arrangement to manage the possibility of additional costs to those provided in the submission (outlined in the pre-PBAC response). The PBAC considered that there were three particular areas of concern; the possibility of people with other types of MDS being included in treatment, uncertainty about the proportion of 5mg and 10mg packs, and about the proportion of non-responders who continue therapy.

The PBAC asked that the DUSC include analysis of the duration of therapy per patient and the proportion of use of the different strength packs in any review of utilisation post listing.

Celgene looks forward to making Revlimid available for patients with MDS associated with a deletion 5q cytogenetic abnormality and will work with the Department of Health to achieve a PBS listing as soon as possible.