2.2          The PBAC noted that the applicant had agreed to the wording of the PBS restrictions, the maximum amount per dispensing (reflecting a 7.5 mg/kg dose) and the numbers of repeats (allowing a maximum of 18 cycles of bevacizumab) as suggested by the November 2013 PBAC meeting.

3.1          Bevacizumab in combination with carboplatin and paclitaxel, is TGA registered for first-line treatment of patients with advanced (FIGO stages IIIB, IIIC and IV) epithelial ovarian, fallopian tube, or primary peritoneal cancer. The PBAC has considered bevacizumab for this indication once previously.

4.1          Bevacizumab was proposed for use in combination with doublet chemotherapy as first-line chemotherapy following cytoreductive surgery in the treatment of patients with advanced epithelial ovarian, fallopian tube, or primary peritoneal cancer.

4.2          The PBAC previously accepted that patients would switch to a triplet regimen of bevacizumab plus doublet chemotherapy.

6.1         The PBAC noted the generally supportive comments from the Medical Oncology Group of Australia describing bevacizumab as clearly an active agent in ovarian cancer, with the overall benefit of bevacizumab as reported in the GOG-0218 trial being attenuated by crossover design and exposure to post-progression therapies.

6.2         No additional clinical trials were identified for the resubmission beyond those considered previously by the PBAC.

6.4         Applying this approach increased the estimate of incremental quality-adjusted life-years (QALYs) gained to (REDACTED) months from (REDACTED) months, previously accepted by PBAC in November 2013.  The Department’s overview of the resubmission raised a detailed set of issues which indicated that the resubmission’s approach provided less accurate estimates of progression-free survival, overall survival and QALY increments than the November 2013 respecified base case.  One of the arguments presented in the resubmission was that right censoring was leading to an underestimate of survival gain. However PBAC noted that the proportion of censored patients at both 36 months’ follow-up and 48 months’ follow-up is small ((REDACTED) and (REDACTED), respectively).

6.6         The PBAC rejected this selective use of data across arms of a trial as being an inappropriate approach to data analysis. In particular, the PBAC noted that the assumption of constant proportional hazards was clearly not met for the analyses of the ICON-7 trial. The PFS and OS Kaplan-Meier curves for the two treatment groups converged for both the ITT and subgroup populations. Convergence of survival curves was also seen in the GOG-0218 trial that had been previously considered in Nov 2013.  Further, the PBAC rejected the suggestion that nominating an earlier time point to start the extrapolation for the control arm avoids confounding due to subsequent treatments being used because current post-progression treatment does not affect overall survival in ovarian cancer. The PBAC concluded that, rather than being “unexpected”, this convergence is a consistent finding indicating that the effect of bevacizumab in these cancers is short-lived. The PBAC noted that the both the methods used for extrapolation by the applicant conflicted with this conclusion. 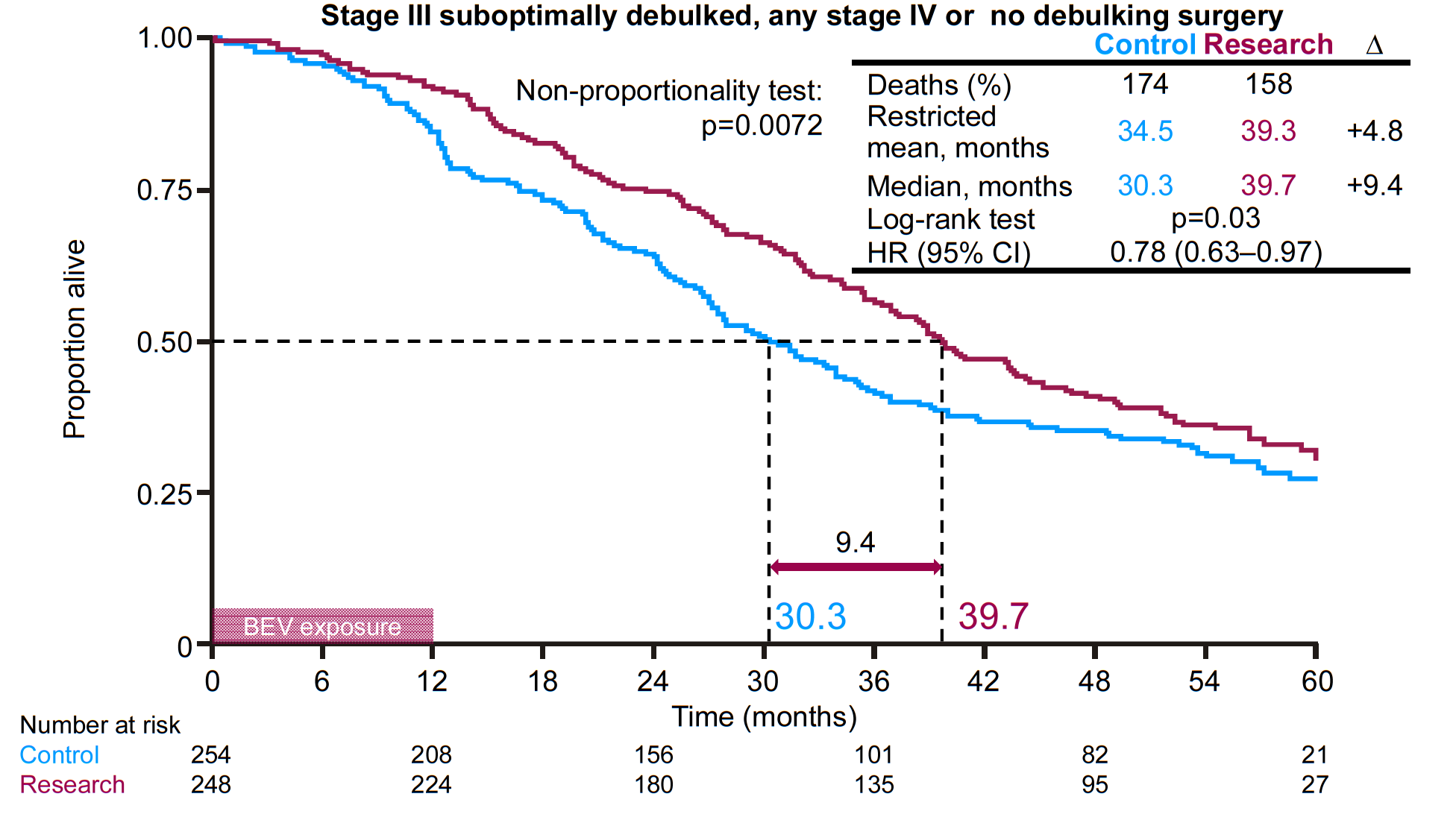 6.8         The PBAC recalled that patients being treated with bevacizumab experience a poorer quality of life than those who do not have treatment with it. For example, from the ITT population of the GOG-0218 trial, the comparison shows that, with the addition of bevacizumab to standard treatment, the patient accepts 16.5 months of treatment rather than 4.5 months, in return for only 1.7 months free of both treatment and disease, compared to 7.5 months with standard treatment, and still dies at the same time with no significant improvement in the quality of life.

6.9                     As previously, the PBAC accepted the claims for bevacizumab as being superior in terms of effectiveness but inferior for safety, compared to doublet chemotherapy alone.  However the PBAC considered that the modelling approaches taken in the original submission, the resubmission and the pre-PBAC response all overestimated the incremental overall survival gain and the incremental QALYs gained.

6.10       The results of the various approaches to the economic evaluation are summarised in Table 1.

Table 1: ICER/QALY and incremental QALYs gained from the economic evaluation

6.11       The PBAC did not accept the ICERs of either the resubmission or the pre-PBAC response because the Committee rejected both of the modelling approaches used to estimate the incremental QALYs gained. The PBAC noted that, consistent with its previous recommendation (which accepted the structure of the economic model, but assumed a median duration of follow-up of approximately 55 months, and used a log-logistic extrapolation in the economic model), the revised (REDACTED)% rebate would result in a revised ICER per QALY in the range of $75,000 to $105,000/QALY, which the PBAC considered was unacceptably high.  The PBAC therefore reiterated its previous recommendation in relation to the appropriate base case of the economic model and the consequence for the pricing of bevacizumab for the proposed restriction.

6.12       The PBAC also noted that the resubmission’s approach to estimating survival gain is sensitive to the method of extrapolation used in the model. This creates an additional source of uncertainty as up to 70% of the life-year gains are now occurring in the extrapolation period.

6.13       The PBAC noted that the risk-sharing arrangement proposed in the resubmission did not make direct provision for use of bevacizumab beyond 18 cycles by patients who would be eligible for the requested listing. (REDACTED).

6.15       The PBAC noted these rationales and that it was difficult to compare the revised proposal with the PBAC’s previous recommendation because: (a) the estimates in the previous submission were based on different dose and number of cycle assumptions; and (b) (REDACTED) a different rebate.  The PBAC did not support this proposed risk-sharing arrangement, concluding that, compared with its previous recommendation, it has the effect of shifting more of the identified risk from the sponsor to the government.

7.1  The PBAC rejected the resubmission because it did not accept the re-modelling proposed by the applicant and therefore did not accept that the reduced rebate was justified in terms of cost-effectiveness.  Accordingly, the PBAC rejected the ICERs generated by these modelling approaches. Applying the revised rebate into the previously accepted model resulted in a revised ICER per QALY in the range of $75,000 to $105,000, which the PBAC considered was unacceptably high. The PBAC therefore reiterated its November 2013 recommendation in relation to the appropriate base case of the economic model and the consequence for the pricing of bevacizumab for the proposed restriction.

Roche is committed to working with the PBAC to achieve a PBS listing for patients with high-risk advanced ovarian cancer at the earliest opportunity.