The major submission sought an Authority Required (STREAMLINED) General Schedule listing for the treatment of schizophrenia.

Lurasidone had not been previously considered by the PBAC for the treatment of schizophrenia.

The submission was made under TGA/PBAC Parallel Process.  At the time of PBAC consideration, a positive TGA Delegate’s summary was available.

Lurasidone was TGA registered on 16 April 2014 for the treatment of adults with schizophrenia.

Listing was sought on the basis of a cost-minimisation analysis of lurasidone versus ziprasidone as the primary analysis and a secondary analysis based on a mixed comparator of ziprasidone, olanzapine and quetiapine.

5. Clinical Place for the Proposed Therapy

The PBAC also considered that risperidone and paliperidone may be replaced by lurasidone and that therefore these products could also be considered as secondary comparators.

The submission presented four randomised trials (Trial 254, 231,233 and 234) and one open label extension study (Trial 231-ext) comparing the efficacy and safety of lurasidone with its primary comparator ziprasidone and secondary comparators olanzapine and quetiapine XR.

An independent search conducted during the evaluation located a multiple treatments meta-analysis evaluating the comparative efficacy and tolerability of 15 antipsychotic agents in schizophrenia (including lurasidone, ziprasidone, olanzapine and quetiapine) by Leucht et al (2013) (Lancet 2013; 382: 951-962). . As this multi-treatment meta-analysis was published after the sponsor had conducted its literature search for the submission, it was included in the evaluation.

Key features of the presented studies are shown in the following table:

A summary description of the trials presented in the submission and a meta-analysis included in the evaluation are shown in the table below.

The PBAC noted that there were no consumer comments for this item.  The sponsor did not request a hearing.

The trial results for comparative effectiveness are shown in the tables below:

Note: Compiled during the evaluation from the Clinical Study Reports.

For the primary comparator, ziprasidone:  Trial 254 was a 3-week randomised trial comparing the safety and tolerability of lurasidone 120mg/day and ziprasidone 160mg/day in clinically stable outpatients with chronic schizophrenia or schizoaffective disorder.  Efficacy was a secondary outcome. The trial was of short duration. High, fixed doses (for lurasidone 120mg/day, and for ziprasidone 160mg/day) were given. There were extensive differences in use of concomitant medication: more patients treated with lurasidone received concomitant benzodiazepines and other antipsychotic drugs (18% and 9% respectively) compared to those taking ziprasidone (9% and 4% respectively).

The PBAC noted the difference in mean change in PANSS between lurasidone and ziprasidone was -1.8 (-4.3, 0.7) in Trial 254 but neither treatment reduced PANSS scores by the minimum clinically important difference (MCID) of 7 points.

For the secondary comparator, olanzapine:  In Trial 231, patients with an acute exacerbation on the background of chronic schizophrenia received 40mg of lurasidone, 120mg of lurasidone or placebo. Olanzapine 15mg was included for assay sensitivity. Both doses of lurasidone and the single dose of olanzapine were associated with spastically significant reductions in PANSS scores over placebo. There appeared to be little difference in treatment effect between both doses of lurasidone.  The Meltzer et al. (2011) publication of Trial 231 reports that a post hoc mixed-model repeated-measures analysis found no statistically significant difference between either of the lurasidone groups and the olanzapine group in change in PANSS total score. There were statistically significant reductions compared to placebo for all drugs in CGI-S score but only olanzapine achieved larger reductions in MADRS compared to placebo.

The figure below from Leucht et al shows the ranked efficacy versus placebo for 15 atypical antipsychotic agents.

Forest plot for efficacy of antipsychotics drugs compared with placebo. 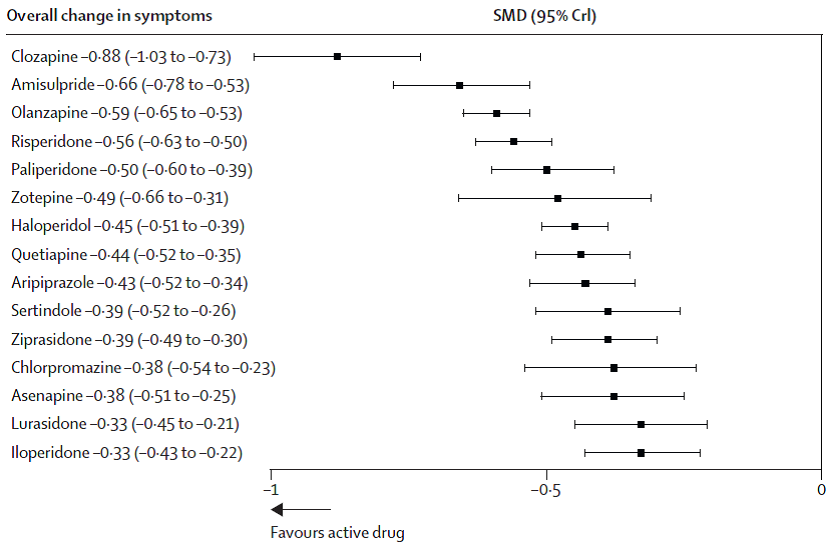 In the multi-treatment meta-analysis by Leucht et al, the efficacy of atypical antipsychotics was compared using standardised mean differences (SMD), which allowed comparisons between studies measuring the symptoms of schizophrenia using different scales (eg Total PANSS, BPRS). The SMD expressed the size of the intervention effect in each study (difference in means) relative to the variability observed in that study (standard deviation).  The table below shows a comparison of lurasidone versus ziprasidone, olanzapine and quetiapine.

The PBAC noted the advice from the evaluators that the analyses conducted by Leucht et al were as described in the publication and robust to the limits of the methodology. The PBAC considered this meta-analysis to be a more comprehensive analysis of the comparative effectiveness of atypical antipsychotics.

Overall, the PBAC did not consider that the clinical data provided in the submission, or identified during the evaluation (Luecht et al) established non-inferiority of lurasidone with the main comparator ziprasidone. The PBAC considered there may be non-inferiority with the other included comparators but none of these trials was designed with olanzapine or quetiapine as active comparators.

The PBAC considered that the three-week duration of Trial 254, and the fact that it was a safety and tolerability trial with efficacy as a secondary outcome, made it difficult to rely on this result to assess the submission’s non-inferiority claim. The PBAC also considered that this trial, in patients with stable disease, did not mirror the proposed PBS population.

With regard to comparative harms, more patients treated with lurasidone reported extrapyramidal side effects, such as akathisia, compared to olanzapine (17.3% vs 7.4%) and quetiapine (7.7% vs 1.7). Fewer patients treated with lurasidone reported weight gain compared to olanzapine (1.7% vs 20.5%) or quetiapine (6.0% vs 8.2%). The PBAC considered that safety profile of lurasidone appeared to be similar to ziprasidone, but noted the effect of the short trial duration on the reliability of a safety conclusion.

A summary of the comparative benefits and harms for lurasidone versus olanzapine, quetiapine and ziprasidone was presented in the table below.

Source: Compiled during the evaluation

a Results vs olanzapine and quetiapine based on 6-weeks using combined lurasidone arms; results vs ziprasidone based on 3-weeks.

The PBAC noted that based on these trials, for every 100 patients treated with lurasidone compared to the alternatives:

The PBAC did not consider that these claims were adequately supported as the comparison with ziprasidone was based on only a short trial with patients with stable chronic schizophrenia in which neither lurasidone nor the main comparator ziprasidone reduced the PANSS score by the MCID of 7 points. The PBAC considered there may be non-inferiority with the secondary comparators but Trials 231 and 233 used olanzapine and quetiapine for assay sensitivity and between group efficacy analyses were not pre-specified.

The submission presented cost minimisation analyses of lurasidone versus ziprasidone as the primary analysis.  A secondary analysis was based on a mixed comparator of ziprasidone, olanzapine and quetiapine (using trial based and defined daily dose (DDD) based equi-effective doses). Additional cost minimisation analyses versus olanzapine were undertaken during the evaluation.

Equi-effective doses used in the primary and secondary analyses are shown in the table below.

The proposed DDDs used in the secondary analyses were lurasidone 60mg, ziprasidone 80mg, olanzapine 10mg and quetiapine 400mg. This is summarised in the table below.

The PBAC considered that the derivation of the equi-effective doses of lurasidone and ziprasidone from the fixed dose, short-duration, safety Trial 254 was not reasonable. Both were given in high doses: ziprasidone 160mg is the highest recommended dose, lurasidone 120mg is towards the higher end of the recommended range. Neither arm allowed for dose titration.

The PBAC considered that the equi-effective doses of lurasidone and quetiapine were confounded by high initial dose regimens used prior to flexible dose titration in Trial 234.

Overall, the PBAC considered that the use of DDDs to estimate equi-effective doses was not reasonable because they were not necessarily the doses likely to be used in routine clinical practice, and considered that estimates based on trial doses would provide a greater level of confidence.

The submission used prevalence data from the Australian Bureau of Statistics National Health Survey 1995, extrapolated to the period 2001 to 2011 in the Access Economics Report (2002), and further extrapolated to the period 2012 to 2018 for the submission.  The PBAC considered that these extrapolations may not reflect the current prevalence of schizophrenia in the Australian population.

The submission applied a linear 5% annual increment to the proportion of patients with schizophrenia treated with atypical antipsychotic agents, reaching 100% of all pharmacological treatment regimens by 2022.  The PBAC did not consider this approach to be reasonable as the DUSC analysis demonstrated much higher rates of growth in the use of the atypical antipsychotics.

The PBAC noted the cost estimates were based on epidemiological data collected before 1995. The PBAC agreed with the ESC that the estimates included unsupported assumptions about market uptake, unreasonable estimates of market share and were based on single selected doses strengths of lurasidone and each comparator, and were therefore highly uncertain.

The submission estimated a net cost per year to the PBS less than $10 million in Year 5.

The PBAC rejected the submission on the basis that non-inferiority with the comparators was not established because of the fundamental limitations of the trials presented. The PBAC considered that therefore the cost-minimisation approach used was not justified by the evidence presented in the submission.

The PBAC agreed that ziprasidone was the appropriate main comparator.

The PBAC considered that the clinical data presented did not adequately support a claim of non-inferior comparative effectiveness and safety.  The PBAC noted that trial 254 was designed as a safety and tolerability trial, and did not provide sufficient basis to assess the clinical effectiveness of lurasidone compared with ziprasidone. Other trial data provided in the submission included anomalous results such as a higher numerical result for the 40mg strength compared with the 120mg strength.

Overall, the PBAC did not consider that the clinical data provided in the submission, or identified during the evaluation (Luecht et al) established non-inferiority of lurasidone with the comparators.

The PBAC considered that the estimates of utilisation and cost included assumptions about the prevalence of schizophrenia, market uptake and market share that were not reasonable, and were based on single selected doses strengths of lurasidone and each comparator.

The PBAC noted the submission meets the criteria for an Independent Review.

The sponsor is disappointed with the decision and disagrees with the PBAC’s interpretation of several aspects of the evidence presented, in particular, the heavy emphasis placed by PBAC on results of the published multiple treatments meta-analysis by Leucht et al..

Additionally, the sponsor had hoped that PBAC would consider the longer-term evidence of lurasidone’s efficacy and tolerability profile provided in the submission.

The sponsor believes that, contrary to PBAC’s view, the WHO DDDs provide a reasonable and conservative basis for the estimation of equi-effective doses between the various treatments.

The sponsor notes that the clinical evidence presented in the submission was chosen based on advice received regarding the most relevant comparators in the Australian treatment setting and may not represent all the strongest clinical data available for lurasidone in schizophrenia.

The sponsor remains committed to working with the PBAC to achieve an appropriate PBS listing for lurasidone in schizophrenia.