DUSC Review on the Utilisation of Antipsychotics - August 2013

To inform the PBAC of the main findings of a stage 2 utilisation analysis of antipsychotics by the Drug Utilisation Sub-Committee (DUSC) conducted in June 2013.

Assessment of sequential or co-administered psychotropic drugs was limited to antipsychotics and antidepressants. Other classes of psychotropic drugs, such as benzodiazepines, were beyond the scope of the stage 2 analysis.  Lithium is classified as an antidepressant in the PBS Schedule and was therefore grouped with antidepressants in this report. It was noted from the DUSC report that the World Health Organisation Anatomical Therapeutic Chemical (ATC) classifies lithium as an antipsychotic.

In addition to antipsychotics and antidepressants, anti-dementia drugs (anticholinesterases and memantine) were also analysed as part of medicine regimens in the elderly.

The prescription data was extracted from the Medicare Department of Human Services (DHS) Pharmacy Claims database (DHS-Medicare is the Government agency that collects information on all PBS prescriptions dispensed in Australia).

Due to limitations in computation capacity, analyses within very large data sets (for example, all prevalent patients) were reduced to a 10% patient random sample. Where small numbers of patients over time were analysed (for example initiating patients), a 100% sample was used.

All antipsychotics (ATC N05A) listed on the PBS and RPBS in Australia were included in the analysis except clozapine, since no de-identified patient information such as gender or age is provided when clozapine is supplied through public hospitals.

4.  Results of the utilisation analysis

The PBAC were asked to note DUSC’s stage 2 findings: 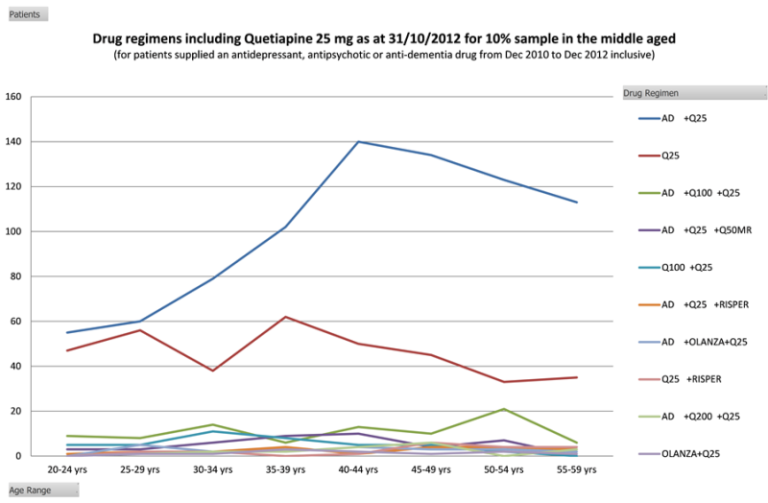 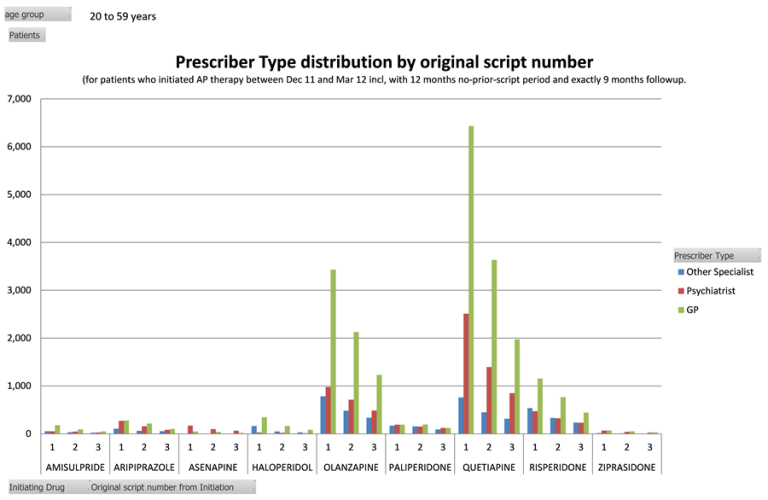 Y-axis is the number of original prescriptions

The PBAC recalled that at its April 2013 meeting, the Committee considered that changing the listings for all atypical antipsychotics to telephone Authority Required would constitute considerable inconvenience for prescribers. Moreover, the PBAC noted that prior to implementation of streamlining in 2007, there was already evidence of use of atypical antipsychotics in the elderly. Therefore the PBAC considered that it was unlikely that requiring a telephone authority would reduce overall inappropriate use of antipsychotics.

The PBAC considered that quetiapine 25mg formulation is not a therapeutic dose for any of the PBS listed indications and agreed with DUSC that the only role for the 25mg strength of quetiapine, within the PBS restrictions, could be for dose titration in older people with bipolar disease or schizophrenia.

The PBAC considered that if telephone authority is required for only the 25mg strength of quetiapine,  the prescribing could inappropriately shift to higher strengths or alternative agents. However given the high rate of potentially inappropriate use of antipsychotics across all adult age groups, the PBAC requested that the Department explore the potential impacts of changing the listings from streamlined authority to Authority required before finalising a recommendation.

The PBAC also considered that a smaller pack size of 25mg quetiapine would be more consistent with the place of this strength in dose titration.  Therefore, the PBAC requested the Department liaise with the Therapeutic Goods Administration (TGA) and the sponsors to discuss reducing the current pack sizes of the 25mg quetiapine, from 60 tablets to 30 tablets.

The PBAC requested that the number of repeats of 25mg quetiapine be reduced from five to zero. This listing was considered to be sufficient for dose titration in bipolar disease and schizophrenia, and would encourage regular prescriber review for patients treated for non-subsidised indications.

The PBAC also referred the matter to the NPS MedicineWise to address the issues of the potentially inappropriate use, and prescribing of low dose quetiapine in adults. The PBAC considered that it was important to consult with prescribers in both general and hospital practices in the development of any proposed campaigns to better educate and promote prescriber behavioural change towards antipsychotics. The PBAC also recommended that these concerns be communicated to the Australian Medical Association and the Royal Australian and New Zealand College of Psychiatrists.

The PBAC requested that the Department explore opportunities for the DUSC utilisation analysis report to be put into the public domain, either on the Department’s website and/or in a peer reviewed medical journal.

The PBAC also recommended that DUSC review the whole class of antipsychotic drugs, 24 months after any changes in the pack size or number of repeats.

AstraZeneca does not promote or condone any use of quetipine fumarate which is not consistent with the registered or approved indications.